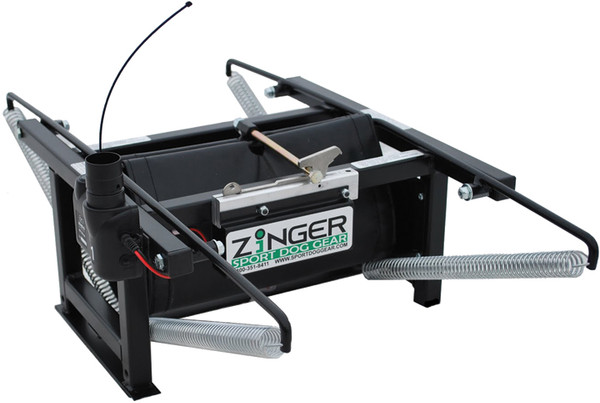 The Uplander is a spring loaded launcher that can launch live birds as well as Dokken's and bumpers. The Uplander is powered by 4 heavy duty springs. The strength and power that this versatile launcher provides allows it to be used in a wide assortment of ways. The trainer can train their dogs to "Sit to Flush" by simulating a bird flushing into the air at the press of a button. The trainer controls when the bird is released. When releasing live birds 2 springs can be removed for a less powerful throw.

Another use for this versatile launcher is teaching a dog to watch a bird launch into the air and land after it is shot. For this type of mark training dead or live birds can be used. It is perfect for releasing live birds of any size (ducks, pheasants, quail, and pigeons) but can also throw Dokken's, dead birds, and large/small bumpers for mark training. The Uplander will throw a bumper out past 20 yards and a mallard duck around 10 yards.

When combined with either Dogtra, SportDog or Garmin (Tritronics) Remote Release Electronics the Uplander becomes an important part of your dog training equipment that will quickly improve your dogs marking ability. In order for your dog to successfully compete on a consistent basis they must be trained on marks and flushes that have the same distance, arc and height of marks seen at your typical weekend Hunt Tests and Field Trials.

More champions have been trained using Zinger Winger remote launchers than any other winger on the market.

The Uplander features Zinger Wingers exclusive servo actuated Sure-Shot Sound™ release mechanism which fires a 209 primer to simulate a shot in the field. It's also important to remember that the launcher can be operated without firing a blank for a silent launch.

All Zinger Wingers launchers will accept ducks, pheasants, pigeons, Dokkens, and bumpers. The Uplander weighs 8 pounds and measures 16" x 16" x 8" with its arms extended. Its versatility allows the user to quickly choose direction, arc and height of the throw.

Available in Silver Only.